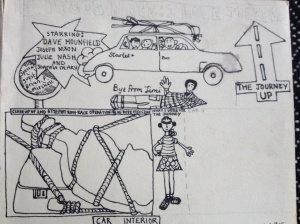 Years ago now, who knows exactly when – Paul Putner was in that Richard Herring Sex Pistols Play; Guy Masterson was doing Under Milk Wood; Glen Richardson and David Mounfield were in a show with Jerry Sadowitz and me and Julie Nash were in a play together by Mitchell and Nixon called The Agent. Perhaps it was 1995? Perhaps it was twenty years ago. It might only be if interest to those in it. But here it is. And if I can’t work out this stupid WordPressthing to insert more than one photo, here’s part one of nine posts.