On one of our summer love days, (a trip to the beach for a swim and then a jaunt around Bexhill-On-Sea), my cohort made the fatal error of refusing to accompany me for a cup of tea.

Here, I try and write movingly and from the heart about how it made me feel. (I mean the line about being a fluffy pea) 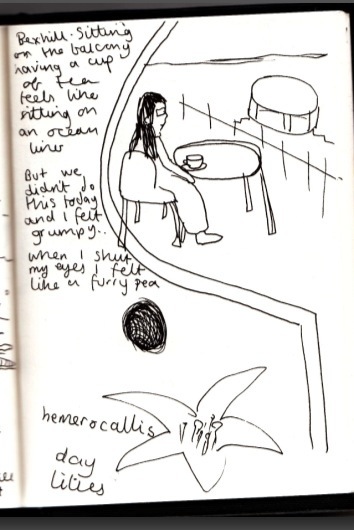 I decided that the fluffy pea line wasn’t attention seeking enough (evidence shows I made notes from Gardeners World only hours later) so I’ve threatened to turn The Tea Withholding into a full length graphic novel. Here are the sketches so far:

Next: a bit about growing up with tea, history of tea and stuff about origins and feminism and politics and that, early tea traumas, climax being when I nearly died through lack of tea, grande finale – the recovery.

This would be better but I’ve run out of time again. Here’s my rant:
RANT
Here’s why I don’t post more. I have about 30 minutes a day to do stuff like this. I usually photograph my sketchbook on my phone but decided to scan instead.
1. I can’t use a computer. So it took about 15 minutes to get my scanner to autoscan and about 7 minutes to work out how to edit the image. I ended up turning the image into a PDF and editing it that way. Also, each image was upside down. I suppose I could have learnt after the first one..

2. WordPress wouldn’t let me upload any of the images onto a new post or even write any text. Is that because i saved them as PDF’s? Anyone? So I’ve resorted to this

A) email the PDFs to myself
B) open them on my phone, take a SCREEN SHOT of them, trim them in ‘photos’ and save
C) continue posting from my phone as usual

ISN’T THERE ANOTHER WAY?

Latitude, Cricket, Style Update and Something For My Mum
Robin Ince And The Jelly Fish Lampshade

Comments on "Graphic Novel about Tea (Work in Progress)"