Dear Fan*
I’ve been everso busy with my writing and here’s the proof. Me and George Egg did a vaguely food/bread themed show last Tuesday called Jo Neary Kneads An Audience and George Egg Has Something To Prove.
This is the Show Time Guide we made to give away. If you’d like us to do this show at a venue near you, let us know. Then you too can own a deluxe posh paper, all folding programme. The show was great fun as you’d hope with a comedy show. And took place in the magnificent Bombanes venue, George St, Brighton.
The front cover. 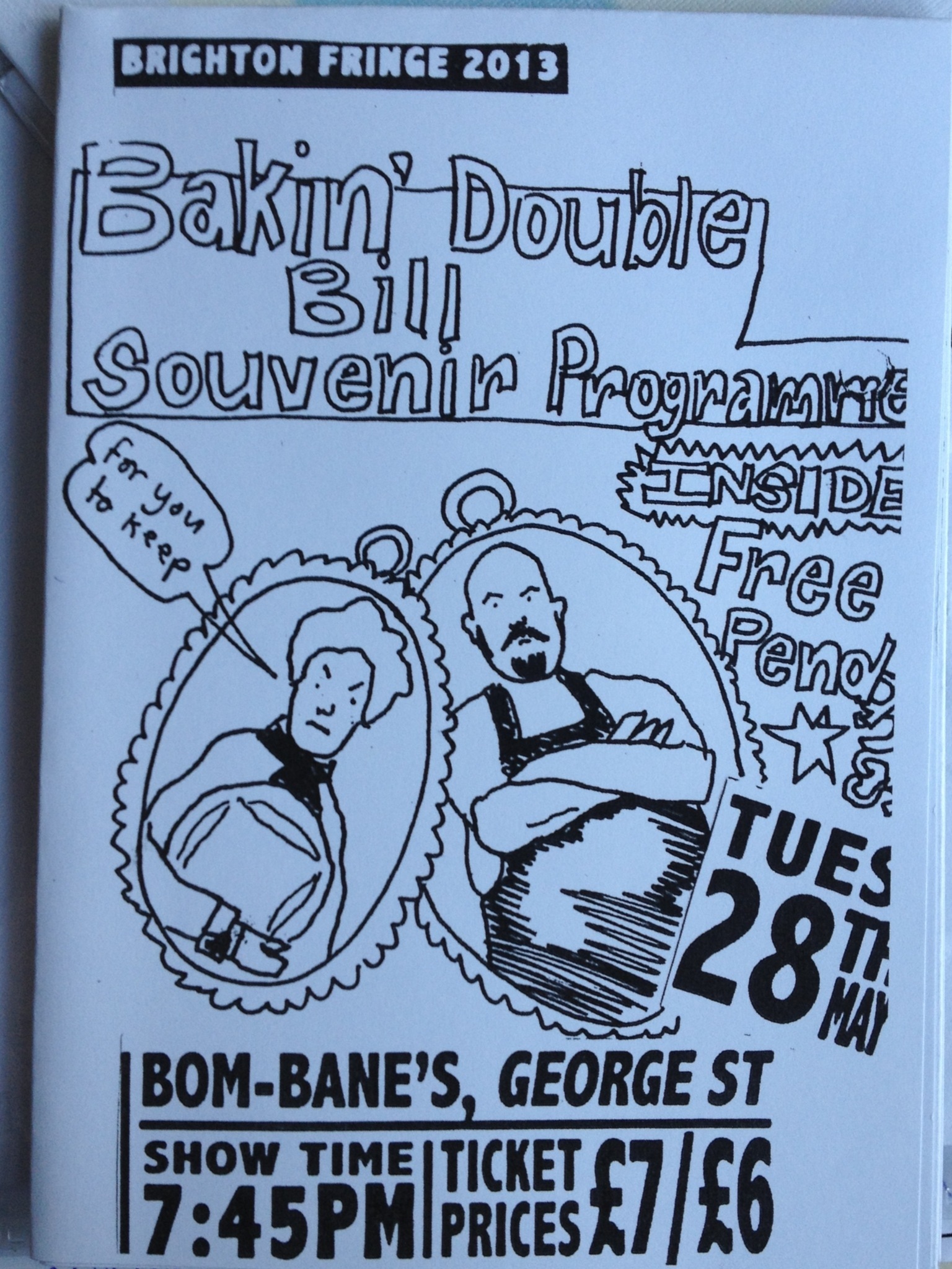 George Egg’s Pages – How To Bake Real Bread On An Iron
I love these, look at the great attention to detail and the care and precision in both the baking and the guide to it. You can see George cooking and baking in a hotel room on YouTube, search for HOTEL SURVIVAL

Me and George Egg both did the Visual and Performing Arts degree at Brighton University.

We decided to do a slightly anarchic, VPA-ish experimental show for a change and certainly achieved this with some elements, most notably in the form on a mono brow on a stick and a cardboard flat chest up a homemade t shirt for Russell Neary.

Harking back to college days made me want to do this programme like a fanzine (or ‘Zine. Not sure which is least pretentious). Here’s my contribution – a memory about cooking (or not) for the Canadian (Alternative Tentacles) band Nomeansno 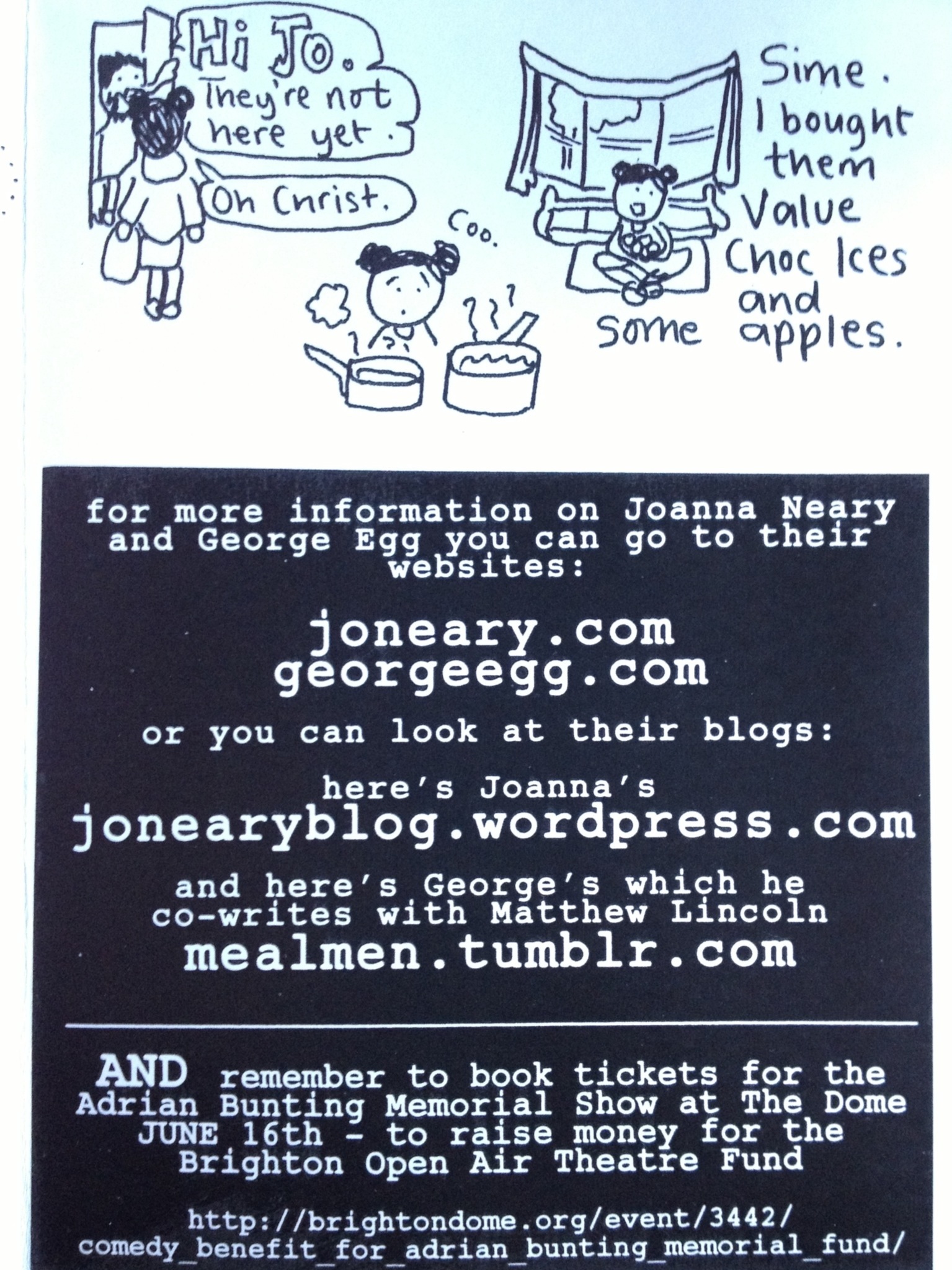 They were everso nice. Rob Wright was resplendent in a floor length leather coat and they gave us a lift to their gig in their van. I asked Mr Wright what Vancouver was like and got their address to write to them but never did. By the way, you can find a link to Ade’s BOAT benefit gig on my website under ‘Live’.

Here we decided to do interviews with our spouses. We both met our true loves when we were doing VPA.

And finally, a programme of what our show would entail and some thank yous. I have four paper copies of this zine/programme left so if you’d like one, let me know and I’ll post them to the first four who ask. And the *fan at the start of this post doesn’t refer to you, the reader but to the only person who asked why I hadn’t written a blog for a while. Normal service will resume when my radio recordings and giant venue gigs are out the way (21st June).
The Programme Page 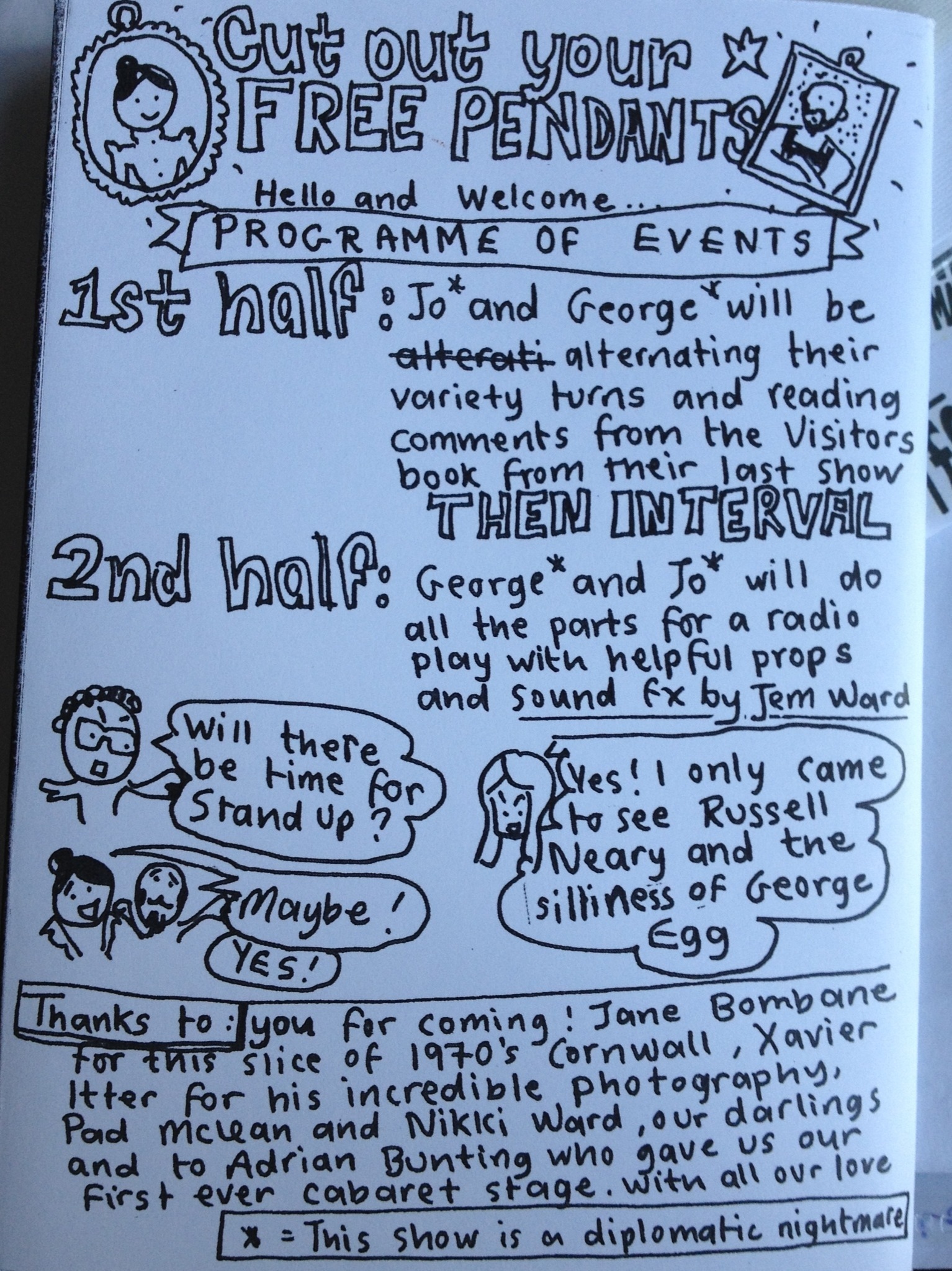 Until the 21st of June!
Ps I need to apologise to George and you the viewer for the blue-ish hue to these photos. I took them at twilight with my phone. Sorry.

Eddie Vedder’s Ukelele and Other Banes Of My Life
Latitude, Cricket, Style Update and Something For My Mum