After leaving University where I’d ‘studied’ art and theatre*, I was lucky enough to be invited to do several parts in a play (including playing God in the style of Groucho Marx. I KNOW). The extra good bit was that it was to be performed in Slovenia. So obviously, I kept an over enthusiastic travel diary about it and made it into a little comic.

So here is my first ever travel diary/trip abroad. I was terribly overexcited the whole time as you might be able to tell.
1. The Journey.
To a bumpkin from Cornwall, London was slightly terrifying. (National Express used to be those colours).

2. The Flight
As a feckless youth, I worked on the bar of the Student Club and had neglected to tell them I wouldn’t be able to work for two weeks. I phoned up and handed in my notice, before they had chance to fire me. They agreed that that was a good idea.

I’m not sure why I noted going to the toilet. Perhaps it was some kind of London toilet like a throne or a pit. Lets have a competition! Best suggestion as to why the toilet trip warranted a mention wins an illustration of said reason, a necklace made of buttons and a Tunnocks Caramel Wafer. Competition closes on June 8th 2013. 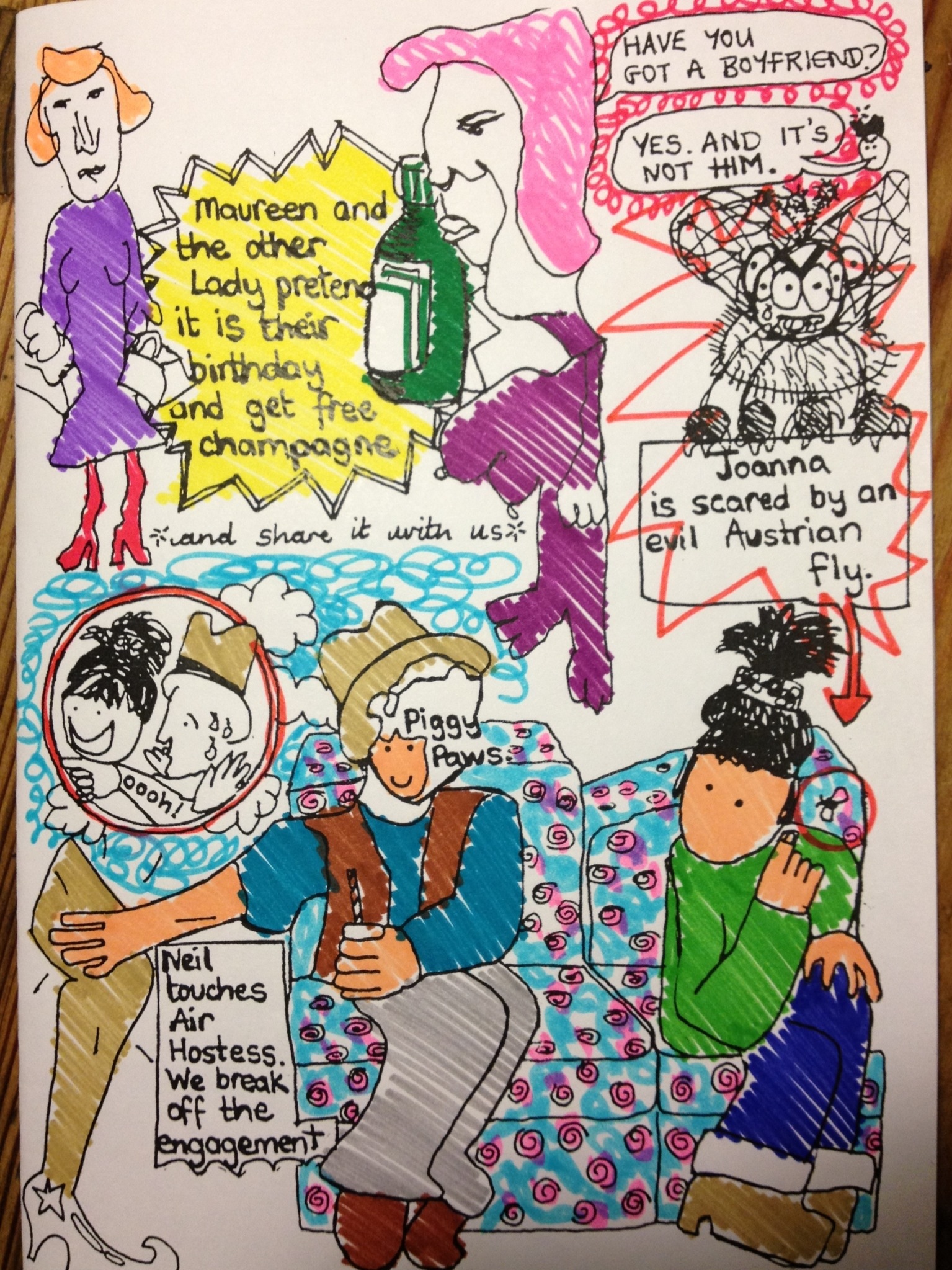 3. Driving In Klagenfurt
The road signs were overly fascinating. (This WAS in the days before doing eBay on your iPhone. uRemember?)

4. Bonny Top In Slovenia.
That title was a parody of a Bunty comic story.

5. Hello Tatijana.
Tatijana was lovely and I’d love to see her again (hint hint, are you reading this, TZ? I’m going to do loads of Slovenia tags..) 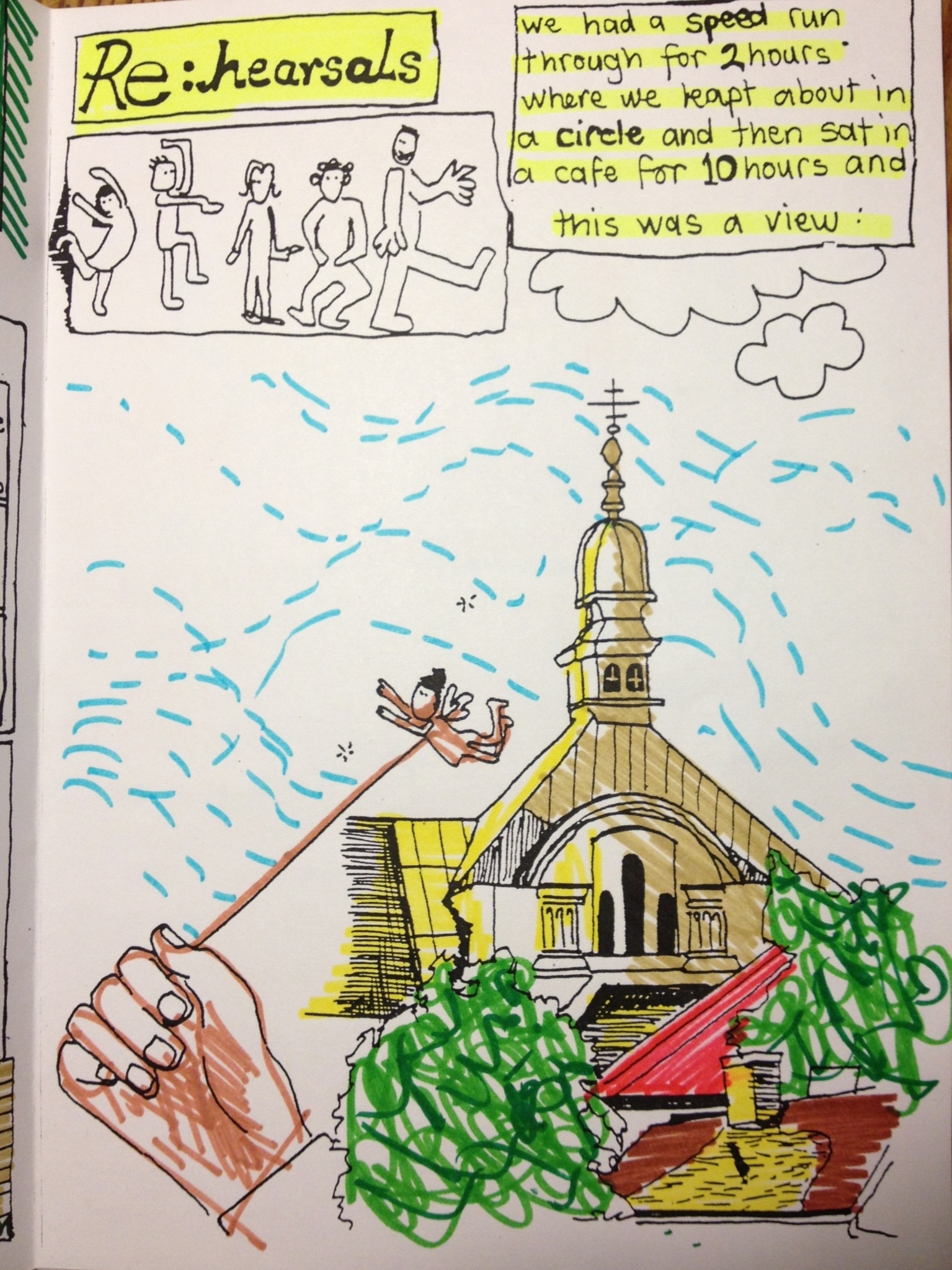 7. Grahamcek by Joannitsa (Slovenian names).
Graham is mad about cars.
I wish I’d recorded what the flashers line was in response to. It was definitely prefixed with ‘that’s like saying…’

Let’s have a competition. Whoever sends in the best set up line to ‘that’s like saying people who do things in parks are flashers’ wins an actual lovely prize of hand coloured bespoke drawings and some badges. Competition closes on June 4th 2013.

8. A Fanny Of Thespians.
I can’t remember what the play we were doing was called or what it was about.
Let’s have a competition. Best Balderdash-like title and outline wins an illustrated comic strip of the play idea and a used pencil. Competition closes 12th July 2013.

9. First Night
Here are the clues for the Blog Balderdash competition. 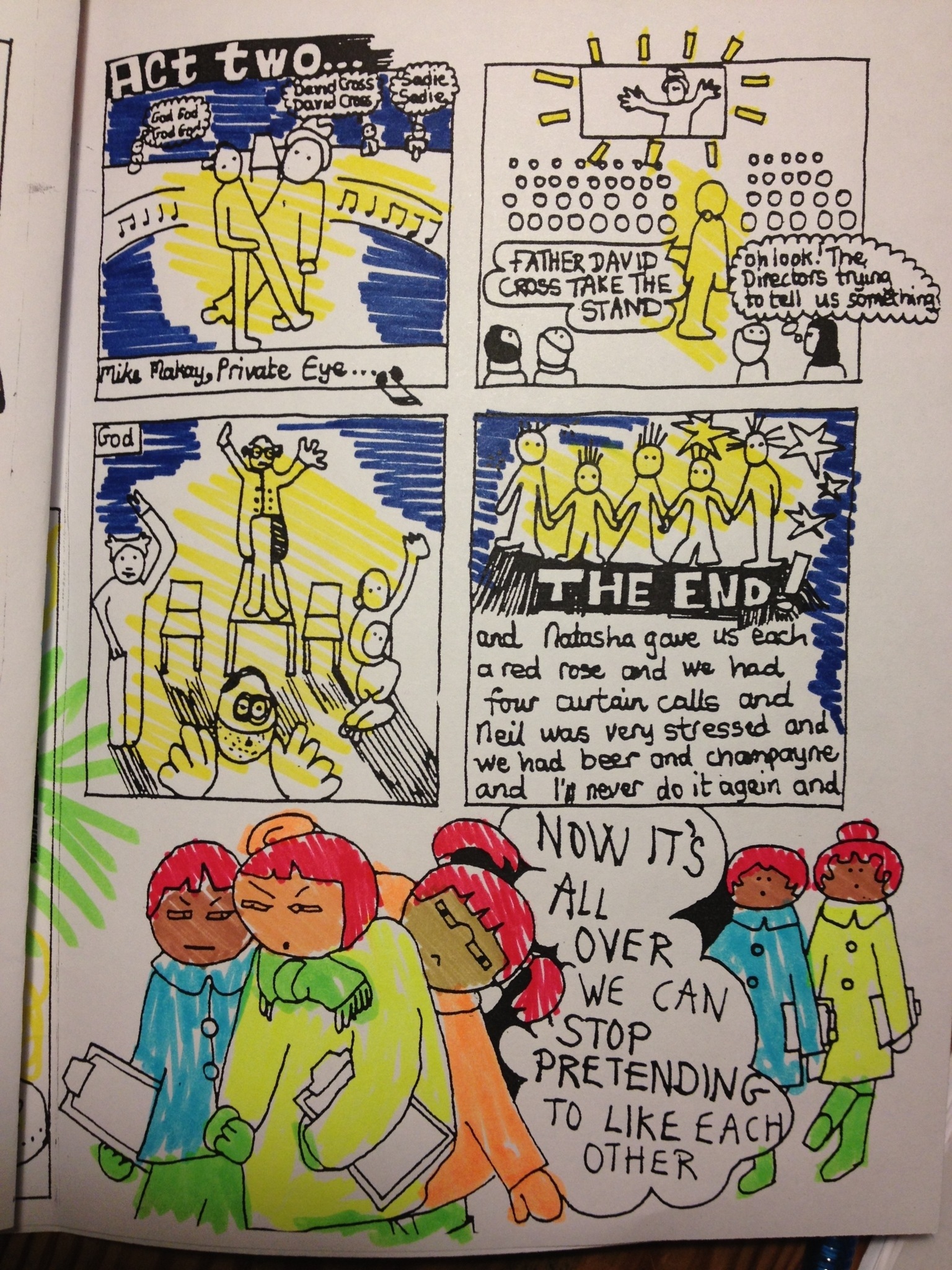 10. Caves
And finally, after poncing about and dicing with death (my mum reacted to my trip to Slovenia with ‘but you’re going to do a play in a war zone’), we had a few days out. I know the bit about annoying Japanese tourists sounds wrong but when I wrote this diary, I didn’t know that. There were people taking photographs by standing in front of my head and eyes and I was simply being an angry ignoramus.

So as you can see, it was a wonderful time. Now, if you want to enter all three competitions, feel free to leave your entries in the comments bit or email me at jo@joneary.com and I will assemble a panel of judges.

If anyone really does enter the competitions I will be filled with joy. Thank you for reading my blog and see you next time for

THE INCRIMINATING ANNIVERSARY PAGES and THE LOVE DAY OF HEARTS #5. (subject to approval by artists husband)

*= if anyone else did Visual and Performing Arts, you will know that we did a 10 minute performance every 12 weeks and spent most of the time eating vast Ploughmans lunches in The Basement. It was £1.50 and you got so much Brie/Stilton/cheddar that half of it would go back to the bedsit in a napkin. I also used to sit in my room playing guitar or a game we invented called Broom Ball. My husband was the co-creator and he says he didn’t even know I was DOING a degree at the time. But it was brilliant in so many ways. Perhaps I’ll do an arts degree comic about it sometime. Or a talk at your local college.
Now get competing.